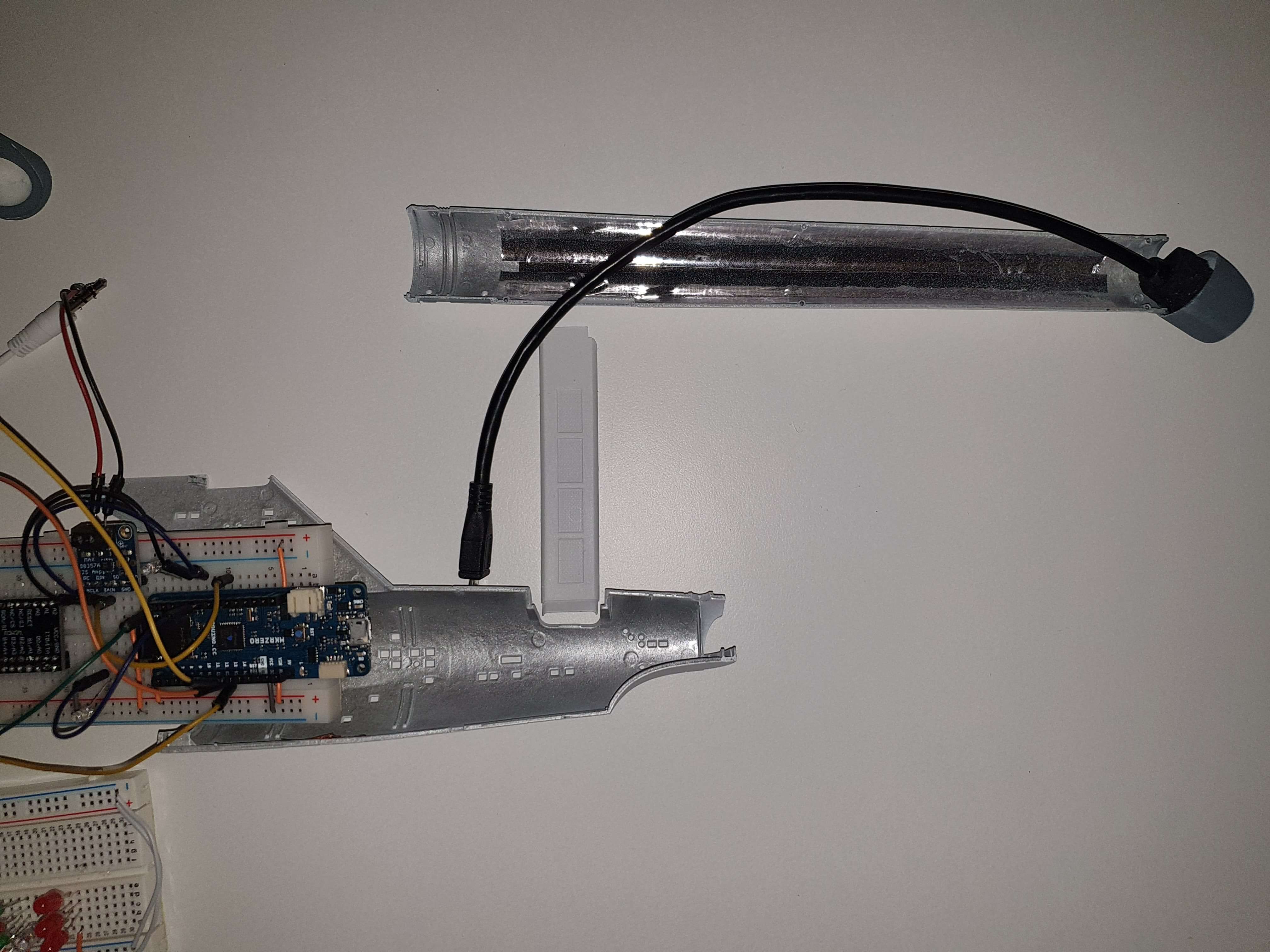 I have to extend this USB cable

Hopefully, I have a whole day free to do some work today, so I figured why not try liveblogging it as I go? There are a few tasks I really want to get done, so let’s see how far I get.

I want to be able to update the Arduino code in the future, which means I need to make the USB port and micro-SD card available for future use. After much consideration and some failed tests, I’ve decided to put one port for each at the back of each nacelle, covering them with the nacelle caps, like so:

I used a thick port so I had a good contact surface to mate to the kit part, but that means the cable is too thick to go through the pylon. This means my first task today is cutting through the cable and extending it with thinner wires before mating it back up to the male portion to go on the board.

I switched to a white cable for the end since it’s the thinner cable is more flexible to wind around inside the secondary hull. I’m pretty happy, though I had some issues matching two different kinds of ground wire from each cable.

After a quick liveblogging break, next up is the SD card reader. This is so I can pop out the SD card, transfer files to it and put it back in the ship.

There are two issues here. One is mounting the reader to the second nacelle cap. The other is that the wire is too wide to fit. I’m hoping I can just fold over the wires and that’ll be enough.

With the wire width issue seemingly solved, it’s time to carve out the card slot in the nacelle cap.

I’m thinking of using hot glue to anchor the adaptor into position.

Alright, I was going to test some existing code I have, but then I remembered that I had some LED flash boards delivered last week. Time to test them out!

Earlier in this project, I had some blue LEDs fading and a bottle cap of static coloured LEDs. Today, with a new improved fading script, I’ve combined them into this:

The problem with the previous script (and, it turns out, all the scripts I was using) was they it used a delay() function to control the timings. What I didn’t realise was that every time delay() ran, it stopped EVERYTHING the Arduino was doing. This meant that the script I was using to flick between frames on the screen also caused the LED fades to delay for the same amount of time. Each LED would increase in brightness 1 step every 30 seconds, instead of gradually.

I’ve since overcome this by comparing milliseconds for if statements. I’ve also wrapped my two fade scripts (“fade on” only, for booting the ship, and “fade continuously” for Bussards etc.) in a class each of their own, making the code MUCH lighter than previously. Hence, the effect above.

I need to expand this to replace quite a bit of problematic code I’ve already written, but this is just a lot of manual labour for a liveblogging day.

Job 4: The rest of the lighting

With the USB and SD card ports now mounted, I will be able to adjust the light frequency as much as I like so long as everything I need is installed. My next step is to take the model and plan where and how I’m going to mount everything.

I thought about it, took a liveblogging break, came back, tried out a few things and decided there was one more step I should do first…

I’d painted the inside of these windows months ago, and now it was time to install them.

Overall I think it’s been a productive day. I made some real progress installing some of the trickier hardware, now I need to concentrate on placing the lighting. I have a hot glue gun which I’ll probably be using for anchoring LEDs in place, I just need map out where each is going to go and how many I can have on each Arduino pin without them being too dim. It’s been A LOT of fun liveblogging this, especially due to the trial and error nature of exploring some of these ideas.

Here is some of the hardware I’ve been playing around with: